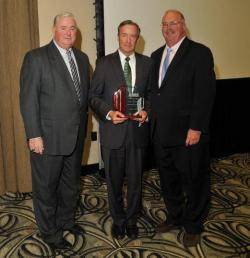 Tweet
AARC’s 55th Anniversary & Awards Luncheon was celebrated Tuesday, October 10 at the Gillespie Center of the Hilton Garden Inn with 200 in attendance.  Bob Nagle was emcee for the event.

The Joseph E. Hickey award was presented to Mossberg & Company, Inc., by his son Joe Hickey, Jr., for their longstanding commitment to AARC and the community.  The award was accepted by James Hillman, CEO and President.  As one of North America’s most respected printing companies, Mossberg’s focus on quality still prevails, in all areas of production and services. The company continually embraces leading edge technology and Mossberg’s skilled professionals work hard to ensure the new avenue contribute to delivering measurable results for their customers.  Employees and management of Mossberg & Company, Inc., are very generous supporters of many not-for-profit organizations in the Michiana area.

The Robert J. Firth award was presented to The 525 Foundation by his son John Firth, for their commitment to educating the community about the dangers of underage drinking and drug use.  The award was accepted by Mike Savage, father of Nick and Jack, who passed away on June 14, 2015 after celebrating at a high school graduation party.  The reason for their passing:  acute alcohol and oxycodone overdose.  Becky and Mike Savage chose to honor the memory of their sons by establishing the 525 Foundation – their hockey numbers were 5 and 25.  Their goal is to prevent another family from having to endure the pain of such a tragedy through outreach, education and support.

Photos From This Year's Luncheon